“I’m amazed and frightened at the sheer numbers we have lost in Parliament in the just-ended New Patriotic Party (NPP) parliamentary primaries,” Majority Leader, Osei Kyei Mensah- Bonsu, has said.

He feared the quality of leadership in the House would be affected following the defeat of over 20 sitting Members of Parliament (MPs), majority of them being chairman of various Committees in Parliament.

After the NPP primaries on Saturday, June 20, 2020, about nine chairmen and Vice Chairmen of committees in Parliament lost their seats.

In the Ashanti region alone, which is the stronghold of the government, 10 sitting MPs lost their seats.

Reacting to this development, the Majority Leader said work in Parliament a few months to elections would be very difficult.

He explained that most of the MPs who have lost their seats will, as human as they are, be disoriented in advancing the cause of government in the House.

Mr Mensah-Bonsu, who may have also been a casualty, renewed calls for sitting MPs to be protected by their political parties.

“I’m frightened because work in Parliament will be affected after losing most of the MPs who are committee chairmen,” he added.

This notwithstanding, the Majority Leader, who is also Minister for Parliamentary Affairs, urged the MPs not to allow their bitterness kill their love for the NPP.

Mr Mensah-Bonsu called for all hands on deck as they prepare to support President Nana Akufo-Addo to retain the presidency. 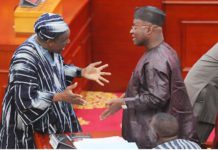 No political party will ‘survive’ after legalizing homosexuality – Majority leader