Since 2015 when actress, Selly Galley married the love of her life, Big J Cartel (Praye Tiatia) of Praye fame,people have been on a constant bump watch, waiting for news of her pregnancy.

A scroll through the comments section of her pages on social media sees fans asking her when she is having a baby, and in interviews, she gets asked about babies.

While the constant scrutiny can be a bit too much, Selly remains undaunted, saying at the right time, God will give them a child.

“For now what I can I do is to believe in God and hope that my Maker will make a way for me because I have done everything humanly possible to have a child.  I cannot kill myself because I don’t have a child. God knows why it is so,” she told Graphic Showbiz on Tuesday, April 21.

According to Selly, no one can put pressure on her to have a child when her husband and her family are not doing so.

“The man I am married to is not complaining so why should Ghanaians worry about it? We understand each other perfectly and that is what matters. He loves me and I love him equally,” she said.

While the general perception is that celebrity marriages do not work, Selly does not believe so, saying Praye Tiatia understands her so much that they solve their issues internally without the involvement of a third party.

“It is the understanding and respect, I respect him and he respects me as well.  More so, I love him very much and he loves me as well and that is what I believe keeps us going. Every celebrity can make their marriage work when they work at it,” she said.

She revealed that her husband had never cheated on her since they got married and that was the mark of a man who truly loved his wife. “I know my husband will never cheat on me because he loves me. I believe I am all he wants in a woman and I make him so happy,” she said.

Describing her man, Selly said Praye Tiatia is a perfect man and the best thing that has happened to her.

“My husband made me who I am today. He has shaped me and made me the perfect woman that I am today. If I had the chance to marry him again, I would,” she sai 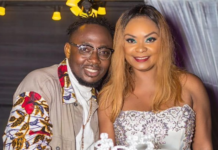 I want to go back to Praye – Choirmaster

VIDEO: I was unaware of Praye’s comeback – Choirmaster