A Nigerian man has narrated how he impregnated his mother-in-law who later gave birth to boy.

The man who shared details of his affair with his mother-in-law in a call-in show, said he got introduced to his new lover while still engaged to his wife.

According to him, he invited his in-law to an ‘entertainment spot’ with other friends.

Heavily intoxicated as he claims he was, he had sex with the elderly woman, a situation which rather became a norm.

However, he stated he was shocked after he learnt that his mother-in-law took seed, and insisted to have the baby after she pinned it on her husband.

The distraught man also revealed that when he asked his mother-in-law why she had the baby, she said the decision is because her husband had always resented her for having only female children.

The man also expressed how sad he is knowing that his son is now his brother-in-law, and the incestual act still bothers him. 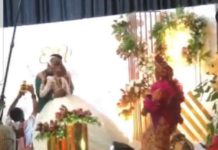 Man hires neighbour to impregnate wife; drags him to court for failing after 75 attempts

Blows fly in as tenant impregnates landlord’s wife and daughter