Actress Akofa Edjeani has urged movie enthusiasts to desist from perceiving actors in the light of roles they play.

She said the characters portrayed in movies are different from what the individual is, in real life.

Speaking on Joy FM’s Showbiz A-Z, Saturday, she said some actors have faced difficulties because people assume the character they play represents their true selves.

Madam Edjeani cited an instance when a man’s admiration for her acting skills affected his relationship with his wife.

According to the actress, the couple would “fight” anytime she appeared on screen and the woman would change the channel.

“Eventually he had to buy a new TV and when my show is on, he will go and watch. It created trouble. I don’t want to create trouble for any marriage,” she told George Quaye, host of the show.

The ‘Azali’ actress stated that actors are only executing roles they have been given and thus they are not to be confused with the character on TV.

She stated that if people tend to find themselves believing the role is the actor’s real character, it is only a reflection of how well the role was played.

“The audience or the viewers just have to know that it is a role we are playing, so if I’m playing a drunkard or a call girl or a doctor that is not who we are, we are just portraying the role,” she added. 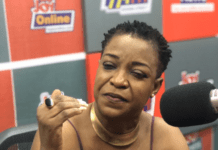