Comedian Funny Face has taken to twitter to confess to being depressed as he advises persons who may be in a similar situation to speak freely about it.

“Depression is real .. talk and be free .. before it kills you inside,” the comedian tweeted shortly after news of his long-time friend, Emmanuel Sheyi Adebayor went viral.

Apart from his confession, Funny Face also confirmed the news of having offended Adebayor by going against his advice.

He added that he had refused to keep mute over matters affecting him because he didn’t want to die before his children.

You are trying to take me back to depression but [it] won’t work. You people are trying to use Adebayor ‘unfollowing’ as a point. Ade is my ‘gee’ and if he has told me not to do something and I have done it’ is [sic] okay and it’s a mistake so he is teaching me a lesson in life [sic].

I will talk and be free and I have to be alive because if I die who will take care of my children. No more depression in my life, he said in the video. 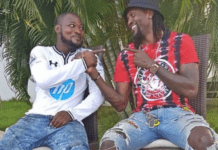