Five persons have been arrested in connection with the murder of Akua Denteh, the 90-year-old woman who was beaten to death after she was accused of being a witch.

The arrest of the five people comes on the back of the Savannah Regional Police Command‘s arrest of the chief of Kafaba, Seidu Yahaya in Damango.

Reports indicate the suspects who were arrested at Salaga on Wednesday have been identified as residents who witnessed the lynching of madam Denteh.

They are currently at the Savanna Regional Police Headquarters assisting with investigations and are to help fish out prime suspects who have reportedly fled to Yeji.

The suspects are one Sanje who is said to have hosted Hajia Filipina and a priestess who declared the deceased a witch.

The other suspects are one Aliu, a teacher, Bumaye, Ashley and Manafo.

I have this strong desire to be a witch – Lady, 20, seeks help in making her dream come true 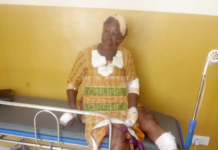