Chairman of the National Democratic Congress (NDC), Samuel Ofosu-Ampofo, has vowed the party will protect the ballot in the December 7 election.

According to Mr Ofosu-Ampofo, the party will not leave anything to chance as they remain poised for a resounding victory in the election.

Speaking on Asempa FM’s Ekosii Sen, he described the upcoming election as communal labour, demanding all hands on deck for their dream to be realised.

“We must protect our votes and be vigilant at the polling stations, ensuring that you are there to monitor the counting process,” he said.

He indicated the strategy is a clarion call that has been extended to opinion leaders, chiefs and party supporters nationwide.

This comes after the Chairman, in an earlier interview, revealed that ‘Ballots Protection Units” are in the offing to prevent cheating on the election day.

He added they have pledged their allegiance to make their rescue mission agenda a reality.

With less than a month to the December 7 general election, political parties have intensified their campaign activities across the country.

The two leading contenders, NDC and the ruling New Patriotic Party are canvassing for votes by comparing track records with each side confident of their victory. 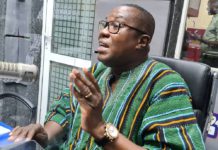