The late Abu Kamara’s replacement for the Yapei-Kusawgu Constituency in the Savannah Region, Iddrisu Salia Kamara, has indicated he will win the parliamentary elections on December 7 to honour the soul of his brother.

Speaking to 3news.com after filing his nomination on Wednesday, October 28, the now New Patriotic Party (NPP) candidate noted his constant touch with electorate with his late brother will do the magic for him.

Abu Kamara died in a fatal car accident with two others at Datoyili near Tamale on Friday, October 16 while they were returning to the Northern Region after the Member of Parliament aspirant had inspected some projects he was undertaking in the constituency.

His death came as a big blow to his supporters, the constituents, and the New Patriotic Party (NPP) in general.

His replacement, Iddrisu Salia Kamara, was confirmed by the National Executive Committee (NEC) of NPP on Sunday, October 25.

The Electoral Commission (EC) had initially opened the filing of nomination for the Constituency on Tuesday but the whole process had to be shifted to Wednesday because the introductory letter to the candidate in the constituency arrived late.

Cheered on by supporters, Mr Kamara filed his nomination at the EC office in Buipe.

One by one, officials of the EC went through his documents to be sure everything was set.

Speaking exclusively to 3news.com after filing, Mr Kamara said he is optimistic of winning the seat.

He said he will make history by winning the seat to honour his brother and for the party.

On his strategies going into December 7, Mr Salia said, his message will target the youth as he will ensure they benefit from more jobs if elected.

“Everyone should come on board for us to enter the hinterlands to win the minds of the electorate ahead of the elections so that we can deliver the seat for my late brother and the NPP.”

“He is a branch executive and a financier of the party and we have no doubt he will deliver the seat that’s why we settled on him,” Constituency Secretary, Mbonwura Mustapha said.

Some party supporters, who were at the EC office to support the candidate to file his nomination were pleased with the choice of the party. 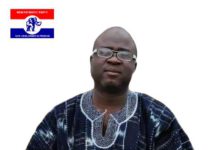