The Chairman of the National Democratic Congress (NDC), Samuel Ofosu-Ampofo, has received a petition filed against former Minister of Works and Housing, Enoch Teye Mensah for engaging in anti-party conduct.

Benjamin Essuman, the NDC Branch Secretary of New City Lodge B, Taifa, in the Dome Kwabenya Constituency, who filed the petition, said Mr Mensah has “extremely misconducted himself as a leading member of the party and therefore must suffer the consequences thereof.”

His petition is about utterances made by the former Minister of Works and Housing on Metro TV’s Good Evening Ghana, August 3, in connection with the Saglemi Housing project saga.

Mr Mensah had expressed surprise at some comments made regarding the NDC administration’s handling of the controversial Saglemi Housing project.

Based on this backdrop, Mr Essuman said Mr Mensah had breached the party’s code of conduct as stated in Article 48(1) and (8) of the party’s constitution, especially with Article 48(8), and in the process scandalised the peaceful and progressive state of the NDC.

He said: “Mr Chairman, by going on national television to oppose the contents of a statement issued by a national officer and much so describing the National Communication Officer and others as spreading ‘lies’, Enoch Teye Mensah did not ensure the unity and cohesion of the party.

“Finally, the statements uttered by Hon Enoch Teye on Metro TV to oppose the position of senior party officials and functionaries are in clear violation of Article 47(e), which states that Party members must: ‘show loyalty to the Party at all times’.” 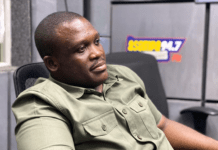 What Sam George did to contest for Ningo Prampram parliamentary seat