Rapper DJ Khaled on Monday, January 20, announced the arrival of the newest addition to his family.

The business mogul revealed through a series of Instagram posts, that his wife of 11 years, Nicole Tuck, had welcomed their second child and son.

Prior to the announcement, Khaled first shared a photo of himself in the delivery room with his wife’s doctor, Dr Jin.

Khaled followed it up with a photo with his eyes closed while praying and another of the ‘I’m The One’ hitmaker staring into the distance with his wife’s bed behind him.

“THANK YOU ALLAH! THANK YOU MY QUEEN NICOLE! BLESS UP DR JIN! 🤲🏽,” he captioned another photo after the delivery of his baby boy.

Many of the couple’s celebrity friends including Chance The Rapper, Busta Rhymes, Martin Lawrence and many others congratulated them.

DJ Khaled and Nicole Tuck first announced to the world they were expecting in September 2019. DJ Khalid shared a sonogram session with his followers on Instagram.

“Asahd, you’re about to have a brother,” the ‘Do You Mind’ hitmaker told his son who was present at the session. “Asahd, look at your brother! That’s your brother. God is great,” he added.

“All I ever wanted to do was inspire the world to be great and to leave a legacy. Almost 3 years ago when I found out my queen was expecting our son Asahd I knew my life would change forever and that OUR legacy would soon be on the way,” the We The Best Music CEO’s caption read. 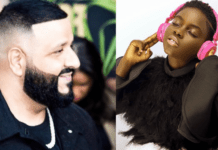 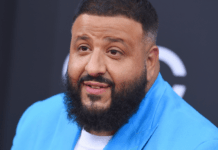