The lawyer involved in the $5 million bribery allegations made against the Chief Justice, Kwesi Anin-Yeboah, says he has done nothing wrong.

Kwasi Afrifa Esq of O & A Legal Consult in the Ashanti regional capital, Kumasi made the comment after a meeting at the Criminal Investigations Department (CID) of the Ghana Police Service.

After long hours of interrogation by the CID, he told the media that he has given a response to all the accusations leveled against him.

The Chief Justice denied the allegations and petitioned the CID to investigate the matter to clear his name.

This was contained in a letter of defence to the Ghana Legal Council after his former client had petitioned the Council against him over his failure to pay an amount of $75,000 (Akwasi Afrifa, Esq) owed the petitioner.

Based on this backdrop, the CID invited the lawyer to aid in investigations.

Meanwhile, Ogyeedom Atta has denied the claims of his former lawyer, insisting that he has never met the Chief Justice nor discussed any issue related to bribery with him. 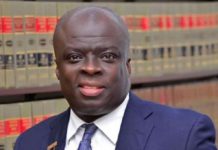