A 30-year-old clerk of the Pentecost District at Assin Fosu in the Central Region, Gregory Osei Donkor has appeared before a Circuit Court in Cape Coast for allegedly forging documents and stealing GH₵ 107,746.92 belonging to the Church.

He pleaded not guilty to the charges of possessing forged documents and stealing and the Court, presided over by Dorinda Smith Arthur, admitted him to bail in the sum of GH¢54,000 with two sureties to be justified.

One of the sureties should have a landed property worth GHc60,000 while the other a government worker earning at least GHc2,500.

Prosecuting, Inspector Gilbert Ayongo told the court that Mr James Ato Hagan, a tutor at Obiri Yeboah Senior High School, and an Elder of the Church, was the complainant.

He said in 2017 the accused was employed by the Church executives, who are witnesses in the case, to receive money accruing from offerings and tithes from all the branches of the Church at Assin Fosu.

He was to deposit same into the District Church Account at the Assin Fosu branch of Ghana Commercial Bank (GCB).

He said in November 2019 and February 2020, the witnesses issued two cheques valued at Ghc27,000 and Ghc21,000 respectively to be transferred into the Church’s Area account.

In March 2020, complainant had a phone call from the said Bank that the cheques had bounced due to insufficient funds in the Church Account for the transaction.

Complainant then informed the witnesses and they suspected the accused to have committed the act.

Gregory was then invited and questioned by the Church executives and he vehemently denied the claims and later submitted a statement of account to back his denial.

Complainant and witnesses, unsatisfied with the statement of account the accused issued, engaged the services of the District Audit team to audit the District Church including all the branches.

On Saturday, July 4, complainant lodged a report with the Police and the accused was arrested.

Per the Bank’s statement, the Police detected that the accused secretly deposited a sum of Ghc18,000 into the Church Account after he was questioned by the  executives.

Police found that the accused had forged the signature of the signatories to the Account and managed to withdraw GH¢53,298.00.

The accused later deposited Ghc27,000 into the Church Account.

After investigation Donkor was charged with the offence. 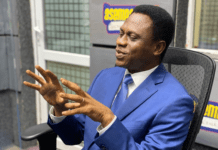