Parents of some students of the Accra Girls Senior High School have once again stormed the school premises, demanding the immediate release of their wards.

They were, however, denied access to the children and left unattended to at the front gate of the school.

Speaking to media at the school, an angry parent whose did not identify herself, fumed, saying the government had no right to hold her child hostage.

Apart from making the ‘right’ argument, she also swore not to vote for President Akufo-Addo in the December 2020 elections.

As if the threat of the President loosing her vote wasn’t enough, she also rained curses on the president.

Watch video of the woman below: 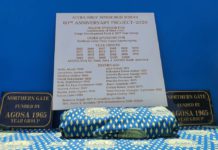