The project dubbed the Greater Drive-way which took off in April 2020, was supported by the Zongo Development Fund (ZDF).

The project included the provision of a school gate and gatehouse, the building of the school wall, asphalting of streets, landscaping the entire frontage and other parts of the school, wire fencing, and the creation of an ultra-modern car park decorated with green grass.

The headmistress, Mrs Gifty Andoh, led a brief ceremony at the campus on Thursday, April 2021, for the commissioning of the projects.

“We are here to commission the products of a dream that was birthed some four years ago by the leadership of the immediate past Headmistress in 2016 and old girl of the 1978 Year Group, Mrs Joyce Saa Acolatse,” she lauded.

The National President of AGOSA, Wilhelmina Emma Arthur at the commissioning said “AGOSA National decided to undertake the projects to give a facelift to the school as part of the 60th anniversary which was put on hold due to the COVID-19 pandemic.”

In order to make the dream possible, each year group was charged to raise funds and make voluntary contributions.

Madam Arthur revealed that it has taken several years for the school to get external support for the project.

However, through the efforts of 1977 AGOSA Year Group; the ZDF came on board to sponsor the school’s gate and gatehouse project.

“ZDF and its high officers took personal interest to ensure that the dream is realized and we will appeal to them again to support the creation of the car park to make space for school events and our fence to ward off criminals and ensure the security of the girls,” she pleaded.

On the part of ZDF, the Deputy CEO, Aisha Salifu, added “Accra Girls SHS, my Alma Mata, is situated at the gate of Ayawaso North, which is the most popular zongo community and has probably, boosted the level of education of Zongo girls’ especially Muslim girls within the municipality and hence, qualifies for support.”

Madam Salifu appreciated President Akufo-Addo for creating the ZDF and Free SHS to support education in the zongo communities. 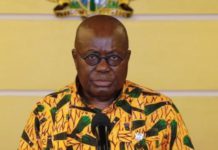