Tempers boiled in a commercial transport, popularly known as trotro, after a passenger refused to pay full fare for his trip.

The incident, which is said to have happened in Benin, Edo State of Nigeria saw the trotro driver punch the passenger for paying N50 naira, (equivalent to 75 pesewas) instead of N100.

The passenger, who was seated beside the driver in the front row, did not plead for mercy but rather reciprocated the insults.

This sparked fury as the driver revealed the elderly man is fond of forfeiting full payment anytime he boards his car.

As their altercation became intense, the driver punched, knocked and attempted to choke the passenger before some persons came to his aid.

All attempts by the driver to get the passenger off board proved futile as the stiff-necked man insisted he will only alight when he reaches his destination. 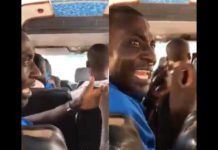