A Kenyan woman, who allegedly stole money from a government official’s home where she worked as domestic worker, has been arrested at a witch doctor’s shrine, police say.

The police said the suspect was arrested alongside her partner at the “renowned witchdoctor’s house” in a town near the capital, Nairobi, “where she had gone to seek protection” from arrest.

Detectives found the suspect as she was being immersed in a basin containing blood from a dead fowl, the Directorate of Criminal Investigations (DCI) said in a statement.

“Upon noticing the detectives, the elderly witch doctor pronounced endless incantations in an attempt to keep them at bay, but that did not deter the sleuths from executing their mission much to the bemusement of [the suspect], who had closed her eyes expecting the sleuths to vanish,” the statement added.

The DCI also tweeted pictures of the paraphenalia that was allegedly being used by the witchdoctor.

The alleged theft of 4m shillings ($33,700; £28,000) and jewellery from the state official’s home is said to have happened last month and the suspect is said to have gone missing.

The police have warned criminals not to waste time seeking witchcraft services as it will not save them from arrest.

Woman sues two brothers for stoning her house at night 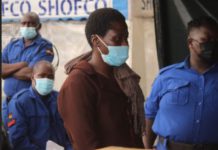