A thirteen year old teenager is in the grips of the Sampa Police for allegedly killing a fourteen year old boy by pushing him on the ground at Sampa in the Jaman North District of Brong-Ahafo Region.
Police Chief Inspector Augustine Kingsley Oppong, the Regional Police Public Relations Officer told the Ghana News Agency (GNA) that on Saturday, March 03, 2018, at about 14:00 hours, suspect and Samuel Yoyitey, deceased had a small misunderstanding which resulted into a fight.
He said suspect in the process pushed deceased hard to fall on the ground, saying that it rendered him unconscious and was therefore rushed to the Fountain Care Hospital by neighbours but was pronounced dead on arrival.
Police Chief Inspector Oppong said body of the deceased had since been deposited a morgue, pending autopsy whilst suspect is assisting Police in their investigation. 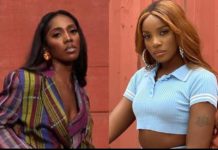 JHS 3 girl dies in fight among pupils at Atomic

Woman fights hubby’s side chick in a restaurant [Video]