Some 12 people have been arrested over their alleged involvement in recent robbery cases and kidnapping of Fulani herdsmen and their dependents around Ejura, Mampong and Akomadan in the Ashanti region.

In a statement issued by the Ashanti Regional Command’s Head of Public Affairs, ACP Godwin Ahianyo, the police said the 12 suspects are also believed to be Fulanis.

The statement said the suspects have already been identified by their victims and have been remanded by the district courts in the various communities.

Read the full police statement below: 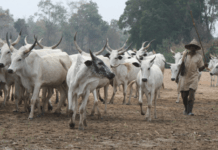