A former Energy Minister, Boakye Agyarko, has challenged his accusers to show proof of acts of corruption during the renegotiation of the controversial Ameri deal.

According to him, those making the allegations should be compelled to “prove their case.”

“I have worked hard and long in this party. So if anybody thinks that I don’t have credential-otherwise how did I become a campaign manager. Let he who alleges make them prove the case. You can allege and just let allegation stand,” he said.

In August 2018, Mr Agyarko was dismissed by the President following revelations that the renegotiated deal was fraught with corruption.

After three years, Mr Agyarko says “at the appropriate time, that issue would be fairly answered to the discomfiture of a lot of people.”

Speaking to JoyNews, he explained that allegations are a common part of Ghanaian politics and therefore, remain resolute.

He made these comments on the sidelines of the New Patriotic Party’s (NPP) regional conference in the Upper East Region.

The former campaign manager of the party, who is gunning to succeed President Nana Akufo-Addo, insists those allegations against him will not thwart his ambition to lead the NPP into the 2024 polls.

He said his conscience is clear and will continue to pursue his ambitions.

“So long as my conscience and my heart are clear, I fear no fall. Those will not impact in any way shape and form my political career going forward and I will continue to serve this party,” he insisted. 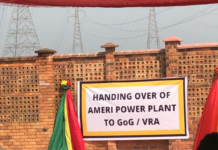