The Tema West Municipal Security Council is expected to hold an emergency meeting today on machete attacks and other developments at Sakumono Village after postponing it yesterday.

The meeting, which borders on happenings prior to and during past weekend, will outline security measures to prevent future occurrence.

Over the weekend, residents called for forceful ejection of a priestess who resides in the neighbourhood.

They alleged that her bodyguards in the last few days have been terrorising residents who use a parcel of land close by as place of convenience.

They were also caught up in extreme fear after hearing gunshots ringing Friday night.

The police last Saturday arrested nine persons including Assemblyman for the area, Richmond Sorgbordzor as residents were massing up to demand answers from the priestess.

Baatsona Divisional Commander, Chief Supt. Julius Kpebbeso, in an interview said those arrested over the weekend had been granted bail.

According to him, apart from the emergency meeting today, the police were also conducting investigations.

“We have taken up the issue and investigating. Since we work with information, any victim or witness to the attacks should assist the police with vital information,” he urged. 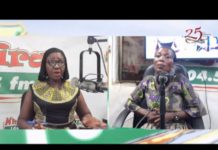