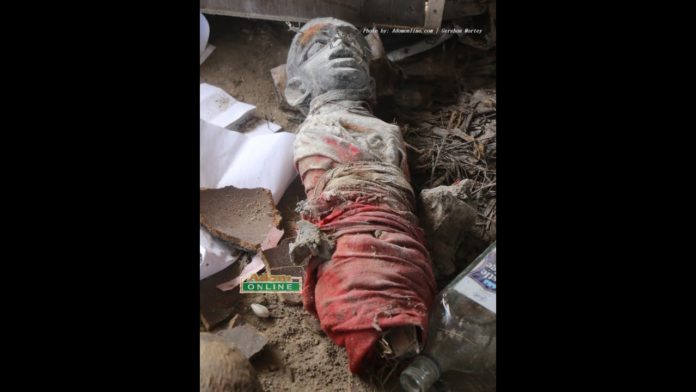 Two traditional priests are in the custody of the police for allegedly killing a biochemist consultant and siphoning what is suspected to be his blood into a gallon.

The deceased, Edward Quartey-Papafio, 64, had left his house on January 15, 2020, at about 3:30 am after receiving a phone call, his wife had told the police.

According to the Director-General of the Criminal Investigations Department (CID), COP Isaac Yeboah, after police investigations, it was discovered that the deceased was last spotted at Adeisu, near Nsawam in the Eastern region.

Both fetish priests hail from the Volta region but reside at Maame Dede near Adeisu.

After a search was conducted at their residences, police retrieved two pump action guns, a single barrel gun, together with eleven packets of cartridges from Mr Lawerh’s room.

On April 29, both suspects admitted having interacted with the missing person for some time, but he was later shot and killed on January 15, 2020, in their shrine.

The suspects reiterated that the deceased was buried at a particular spot within the shrine and led police to the scene. The area was secured for an exhumation order to be granted by the court.

On April 30, the police, including pathologists and other forensic experts, went to Maame Dede and executed the exhumation.

The pathologists retrieved the decomposed body from a grave.

A second decomposed body, whose name the suspect Gameli gave as Kwesi Zomelo, also from Kasoa was retrieved from the another grave.

The team later exhumed human parts, hair attachments, beads, belonging to a woman, police suspect, and bones from a third grave within the same perimeter.

A decomposed human flesh with bones wrapped in a cloth buried among the bodies was also retrieved from another grave. The team in addition retrieved human skulls together with bones suspected to be human hidden under two idols in the house.

Investigations have so far established that on December 2019, the two conspired to murder the deceased, Edward Quartey-Papafio.

They lured the deceased to their shrine and succeeded in collecting cash amount of 10,000 Ghana cedis from him under the pretense that they were going to fortify the deceased spiritually to enable his company to flourish.

On January 15, they invited Mr Quartey-Papafio to the shrine for what they claimed to be the last purification rite and in the process; shot, killed and buried the deceased.

Police say after committing the crime, suspect Lawerh took possession of the deceased’s Itel and Nokia mobile phones and handed them to his third wife, together with a bunch of keys.

The second suspect Adorkunu, on the other hand, confessed that he shot and killed the deceased.

He also confessed to killing Mr Zomelo and one of his masons after the deceased demanded money owed him.

According to COP Yeboah, the remains exhumed from the shrine have been deposited at the Police Hospital Mortuary awaiting DNA testing and identification.

The suspects have been remanded and are awaiting trial.

This report was one of several relayed to the Press on Monday afternoon.

According to the Director-General of the CID, this was to prevent the media from misinforming the public about ongoing investigations and to clear the air on progress made in several topical crimes that have occurred in the country for the first quarter of the year.