The photos captured the footballer with his wife and four girls serve family goals on their vacation in the Maldives.

One of them also featured an elderly woman whose identity is not immediately known.

But one thing that has caught the attention of many is her striking resemblance with Mrs Eto’o, hence followers deducing she would probably be an in-law.

Posting the photos on his Facebook page, he declared his undying love for the family.

His caption read: Some rest, lots of joy and lots of love. My family: my strength, my haven of peace. Thank you so much for these precious moments, princesses!

The photos have earned the family the love and admiration of many who have sighted them. 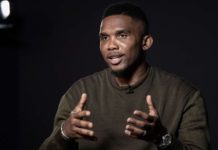 Soldier, wife and child killed in horror car crash near military base