Residents of Yeji in the Bono East Region have been thrown into a state of mourning and shock following the death of a 22-year-old lady.

Family members say they are in shock and yet to come to terms with the heinous act committed against the young lady.

The lady, Georgina Asor Botchwey, met her untimely death after travelling from Yeji to Cape Coast for a nursing admission interview about two weeks ago.

After the interview, a pastor whose name is yet to be known but identified as a husband-to-be of the deceased’s elder sister came to pick her up to Mankessim since it was late to spend the night.

However, nothing was from her neither did she return home until her body was exhumed on Tuesday by police investigators through the lead of the pastor after an arrest.

The body was exhumed from the kitchen of an uncompleted building which belongs to Nana Clark. 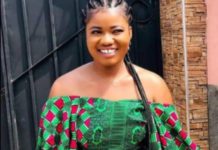