Police from the Accra Regional command have gunned down a suspected highway robber with two others arrested in an operation on the Spintex Road.

The suspect, Blessing Stephen, about 38 years died from gunshot wounds he sustained in a capture operation at the Tonynam Guest House on January 27, 2021, at about 11:30 am.

The deceased has been active-but-evasive in his tactics and has been on police surveillance for the past two years.

Mr Stephen who is a Nigerian ex-convict and a notorious armed robber who usually operates among a gang of six, has been involved in series of highway robberies.

He has also been involved in bank robberies and attacks on bullion vans including the recent bullion van robbery and killing of a policeman at Adansi Nyankomasu near Adansi Tewobabi in the Ashanti region, Manso-meam, Mankesim filling station, Tarkwa- Prestea Highway robbery, and Gomoa -Potsin.

Accomplice Godwin Hetor is said to be a receptionist at a Guest House where the suspects were lodging.

The two accomplices are in police custody, assisting with investigation.

A pistol and four rounds of ammunition were retrieved from the deceased with the body deposited at the Police Hospital mortuary for preservation and autopsy. 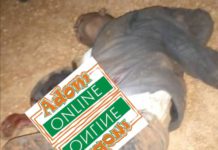