New Patriotic Party (NPP) polling station executives and coordinators in the Assin Central constituency have distanced themselves from a demonstration that was staged against their Member of Parliament (MP), Kennedy Agyapong.

According to the executives, they had no hand in the demonstration to drum home grievances against Mr Agyapong.

Their comment follows a protest by a group identified as the Concerned NPP delegates who staged a demonstration last week against Mr Agyapong, for threatening to cause disqualification of his contender, Eric Baidoo, in the upcoming NPP parliamentary primary scheduled for April 25, 2020.

Speaking in an interview with Adom News, Alex Ankamah, who spoke on behalf of the group, claimed the demonstrators were few NPP members and NDC faithful who have issues with the incumbent MP.

According to him, Mr Agyapong has been diligent in his service to the constituency since he assumed office and they can never pay him back in such a manner.

They pledged their utmost support for Mr Agyapong in any venture he decides to embark on. 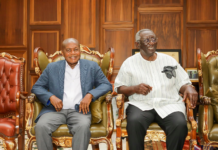