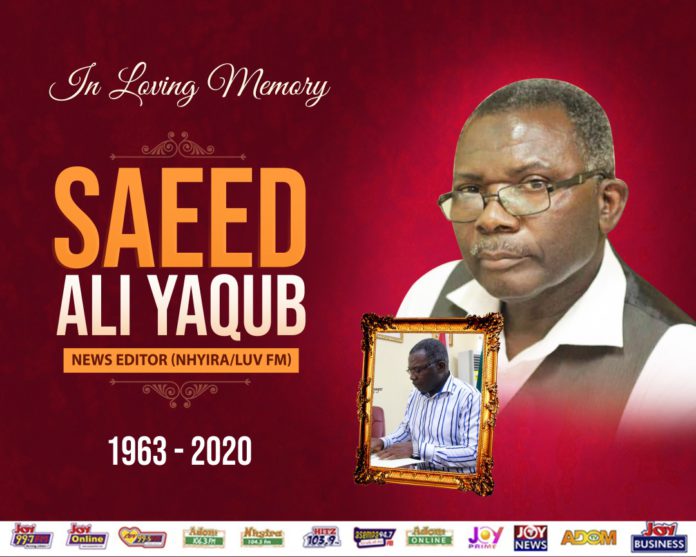 Family and friends on Sunday, August 23, bid a final farewell to the late Saeed Ali Yaqub at his hometown, Gyamase in the Ashanti Region.

The ”Adua”‘ as the Muslims call it saw many high profile persons from all walks of life and especially the media fraternity pay glowing tribute to him.

Saeed affectionately called the ‘Editors’ editor’ was until his death the editor for the Kumasi Unit of the Multimedia Group.

Having worked for twenty years, he left behind two children and a wife.

The Multimedia Group Limited represented in their numbers and supported the family with the funeral arrangement, and other logistics.

Erastus Asare Donkor who led the team to read the tribute emphasized on how Saeed was selfless in all his dealings with people.

“He was selfless. He will stay in the office late in the night to wait for his colleagues he had sent on assignment before he goes home to sleep.

“He was a father not only to his two beautiful daughters but to everyone that came to the newsroom.”

His two children; Jamila Adeela Saeed and Suapharat Binazir Saeed, and wife in their tribute described the death of Saeed as something they will find difficult to live with.

“We pray Allah gives us the strength we need.”

Many of the tributes from the Old Students Association of the Adugyamfi Senior High School where he was Chairman of the Parents Teachers Association and the Association, colleagues from the Ghana Journalists Association (GJA), and friends described him as irreplaceable.

The Regional Chairman of the GJA, Kingsley Hope, said his counsel to the association even though he was not part of the executive board, will be missed.

His efforts were very critical to the association holding its maiden awards ceremony in the region in 2019.