Aggrieved customers of Menzgold have vowed to march to the Jubilee House to petition President Nana Akufo-Addo over their locked up investments despite a police directive against their decision.

The police in response to their notification of a march scheduled for 1:30 pm on Tuesday, February 11, 2020 said they were concentrating on fighting robbery and other violent crimes.

It added the group has already demonstrated in less than six months and will not tolerate any further demonstration from the group.

However, one of the leaders of the coalition, Evans Ewudzi, in an interview with Joy News described the directive of the police as childish.

“I don’t know whether it is the culture of silence or impunity but how can they tell us they cannot provide men to guard us present our petition when they can send policemen to guard the court?” he said.

Mr Ewudzi stressed the customers did not need about 100 men to police the Jubilee House to enable them present their petition.

“We are going to present the petition because the first gentleman of the land is waiting for us and we are going to walk peacefully to the place,” he added.

Read the full police statement below: 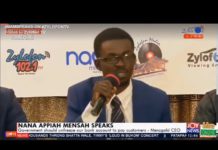