Cases of measles in Europe have hit a record high, according to the World Health Organisation (WHO).

Last year there were 23,927 cases and the year before 5,273. Experts blame this surge in infections on a drop in the number of people being vaccinated.

In England, there have been 807 cases so far this year. The WHO is calling on European countries to take action.

Public Health England say the outbreaks in England are largely due to people who have travelled to areas of mainland Europe that have had outbreaks.

Measles is highly infectious and spreads by droplets in coughs and sneezes.

The infection lasts seven to 10 days. But while most people recover completely, it can cause some serious complications, including:

The MMR vaccine can prevent infection but discredited research 20 years ago that erroneously linked MMR to autism has stopped some people from trusting the vaccine.

The NHS recommends all children receive the MMR around their first birthday and then just before starting school.

Ukraine and Serbia are among the countries with the highest rates in Europe. 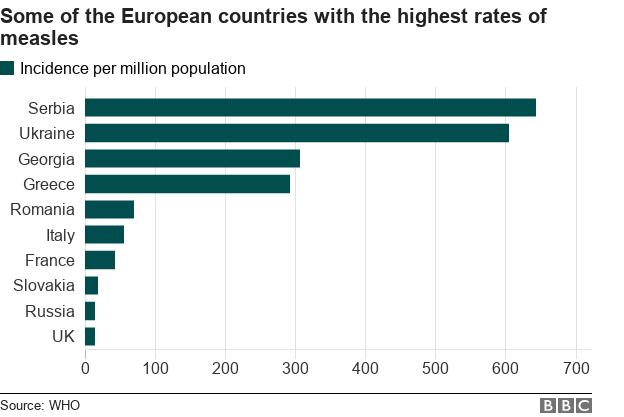 Dr Nedret Emiroglu, from the WHO, said: “This partial setback demonstrates that every under-immunised person remains vulnerable no matter where they live and every country must keep pushing to increase coverage and close immunity gaps.”

Italy’s upper house of parliament recently voted through legislation to abolish the law that makes vaccination mandatory for children before they start school. The amendment will mean parents of unvaccinated children will no longer face fines.

In England, there have been 807 laboratory confirmed measles cases, according to Public Health England (PHE). The highest numbers have been seen in:

Dr Mary Ramsay, head of immunisation at PHE, said: “We have seen a number of measles outbreaks in England which are linked to ongoing large outbreaks in Europe.

“The majority of cases we are seeing are in teenagers and young adults who missed out on their MMR vaccine when they were children.

“Anyone who missed out on their MMR vaccine in the past or are unsure if they had two doses should contact their GP practice to catch up.

“We would encourage people to ensure they are up to date with their MMR vaccine before travelling to countries with ongoing measles outbreaks, heading to large gatherings such as festivals, or before starting university.”

Dr Pauline Paterson from the London School of Hygiene and Tropical Medicine, said: “With a vaccine preventable disease, one case is one too many, and the numbers of measles cases so far this year is astounding.”