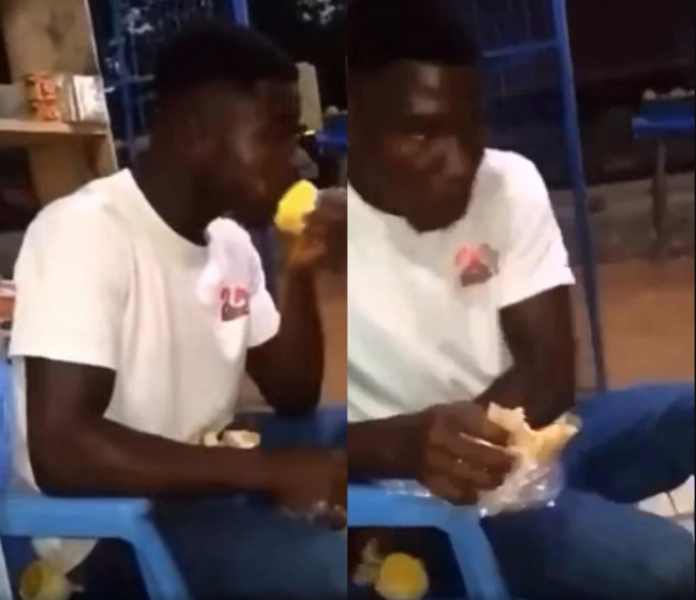 A video making rounds on social media has a Ghanaian man eating bread and fried eggs with oranges.

The video has since sparked debate on social media with many asking if the oranges were a perfect match for the bread and egg for the man who is yet to be identified.

The video which was sighted by Adomonline.com on social media had loads of comments from fans.

Check out the reactions below:

Akosua Otiwaa Ayimadu: This always tastes nice, but if he’s having the orange ‘cos he can’t afford a juice or beverage, may the Lord bless the works of his hands so that he can eat well.

Nana Owusu Sentenze: Hmmm when Jonnas say the system is not working people will be insulting him..chale the country hard ooooo …Its not his will that such a young energetic guy will eat bread with orange..what a diet!

Kwadwo Poku: Those saying he’s doing that cos of the system nu how?? I mean how ? they will be the same ones walking around buying fruit juice from the restaurant and shops and they are the ones calling him broke cos he decided to take his natural.

Jonathan Abavana Kujori: If he’s bought fruit juice you wouldn’t have said anything now he’s bought the fruit and sucking the juice with bread what is more natural than this and you are talking he can’t come and kill himself just let him be.

Michael Kwegyir: The person who took this video did the person went ahead to ask why he did that? We usually conclude things very easily without finding out the reason.

Kay Suite: Oh but I’ve done this couple of times growing up.

Paulina Naa Dzagble Boye: He just wants to trend on social media. He could v squeezed the orange into a cup and mixed it up with some water.