A 26-year-old unidentified man has been murdered by unknown assailants at Subse, a suburb of Mankessim in the Central region.

The residents of the area woke up to find the deceased stripped, tied to a light pole with his arms tied to his back and a white and red rope tied to his neck and stomach.

According to Assemblyman for Twafo Akyinim Electoral Area, Godwin Kofi, he suspects the victim was killed elsewhere and dumped in the area because none of the residents identified him as one of their own.

He suspects the man, believed to be in his 20s, might either be a thief or a victim of mob justice, considering how he was ‘executed’.

He condemned the incident and advised Ghanaians to desist from instant justice and always allow the law to take its due course.

No arrest has been made yet, but the Assemblyman of the area has promised to assist Mankesim police to bring the perpetrators to book.

Meanwhile, the body has been conveyed to the morgue awaiting identification and autopsy.

Family members flee town as woman, 45, is found dead in her room 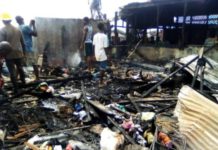