A 41-year-old man, Kwaku Appau, popularly known as Kwaku Bankye has allegedly beheaded his mother at Asamankese in the Eastern region.

The suspect, who an eyewitness described as a well-built mason, is said to have decapacitated his mother with a butcher’s knife in her room.

After carrying out the act, Kwaku Bankye bolted but was later arrested by the youth and handed over to the police.

The cause of his act is not known but a resident who spoke to Adom News said the suspect has mental issues.

Prior to the murder, he added, the two were spotted strolling happily in the community thus found it strange Kwaku Bankye could commit such heinous crime. 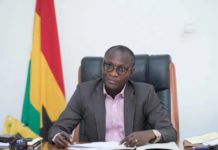