The Ghana National Fire Service (GNFS) has stated with certainty that there was no arson in relation to the recent Kumasi incidents after an assessment.

Ashanti Regional Public Relations Officer (PRO), D03 Desmond Acquah, said “after the intelligence, we embarked on a patrol after 11:pm and Kumasi residents can attest to that fact. We put all hands on deck to intensify our surveillance. None happened under our watch.”

Rather, the service attributed the fire outbreaks to the poor public regard for fire safety and negligence in safety management.

Four major fire incidents have been recorded in Kumasi in the past three days, and an assessment attributed each to several factors.

DO3 Aquah, speaking to Adom News’ Malik Awuku, explained the incident that happened around Kwame Nkrumah University of Science and Technology was as a result of a faulty fridge plug that sparked the fire.

Aboabo’s fire, he said, could be attributed to a wrong wiring in a shop. The welding machine demanded more volts than the system could provide.

The owner and welder are currently in custody assisting with further investigations.

The fire at Dagomba line was caused by scrap dealers who melted iron with deep heat. The heat, he elaborated, fell on the wooden structures, causing them to light up.

However, the Magazine warehouse assessment report is yet to be concluded.

This, he said, led the service to conclude that the fire was not deliberately set, but was a result of human errors. 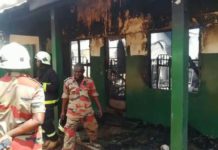