Two persons have been arrested by the Manhyia Divisional Police Command in connection with a fire that gutted the top floor of a market building at Aboabo Station in Kumasi.

They include a shop owner and a welder engaged by the same shop owner for repair works in the shop.

Commander for the Manhyia Divisional Police, ACP Kwaku Buah has disclosed that the duo is currently in custody, assisting with police investigations.

No charges have, however, been made in the preliminary stages but ACP Kwaku Buah explained that if the preventable act was not intended, the individuals could be charged for negligence.

About thirty shops, housing plastic bags and other highly flammable goods were affected in Sunday’s inferno.

The scene has since been cordoned with police protection.

Police and the National Disaster Management Organisation are helping occupants on the ground floor, which was not affected by the fire, to salvage their property.

The fire service has also been at the scene to pick exhibits for further investigation into the cause of fire. 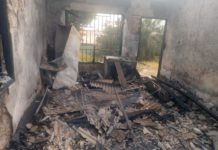