Assin Central Member of Parliament, Kennedy Agyapong, has advised banks in Ghana to refrain from opening offshore accounts because it affects the rate of the dollar in the country.

According to him, such activities go a long way to affect the economy because huge sums of monies are being transferred without a trace.

His assertions stem from his recent scuffle with self-made millionaire and businessman, Ibrah One who dared him to arrest him.

I am going to deal with the banks… those deals must stop. All banks should stop opening offshore accounts. The dollar rate going up is because of that, it is part of the reasons.

What they do is they take monies here and release monies on the other side. But with Ibrah, he takes the monies and he doesn’t even give to the people.

I’m going to the governor to know the essence of opening the offshore accounts, he said. 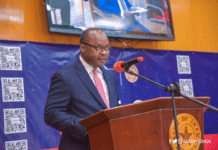