Member of Parliament (MP) for the Tema East Constituency, Daniel Nii Kwartei Titus-Glover, has distanced himself from the arrest of his opponent, Ashai Odampten of the National Democratic Congress (NDC).

Mr Titus-Glover has clarified that Ashai Odampten is under investigation over alleged misappropriation of funds during his tenure as Mayor of Tema, thus, it is out of place to associate the case with his office.

The comment came after the MP was accused of having a hand in the arrest of his opponent.

According to the MP, his attention was drawn to some allegations made by the Tema East Constituency NDC with regards to the arrest of their Parliamentary Candidate (PC).

However, Mr Titus-Glover has rejected the claims, insisting that the case in question is between Mr Ashai and the State.

A statement from his office said: “The Tema East Constituency NDC candidate and nine others are facing the trial on six counts of financial criminality during his term as the Mayor of Tema.

“The case being referred to is between their candidate versus the Republic of Ghana, with respect to some funds alleged to have been misappropriated during his tenure as Mayor of Tema. The report was carried out by EOCO and sent to the office of the Attorney General of the Republic of Ghana.”

The statement also noted that “bail conditions are at the discretion of the honourable court of the Republic of Ghana which has nothing to do with our Member of Parliament and Deputy Minister of Transport.”

Meanwhile, scores of NDC supporters have thronged the Tema Community 11 Police Station to demand the release of their PC. 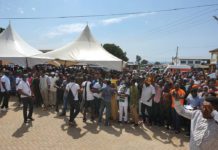