Presiding Bishop of the Perez Chapel International, Bishop Charles Agyinasare, has said his integrity was intact in spite of attempts to tag him with promiscuity by some faceless persons.

The Man of God came under attack in the course of last week for his sermon that condemned the collapse of local businesses, especially the indigenous banks by the government of Ghana.

He was linked with the First Trust Savings and Loans and was allegedly tagged as one of the persons whose loans led to the collapse of the organization just because the Founder of the Financial Institution celebrated him on one of his birthdays in a post on Facebook; an allegation he has vehemently denied.

On Sunday while preaching to his congregants through the “Virtual Church,” the Bishop said his integrity could not be questioned.

“Since then, the only woman I have had sex with is my wife and that happened after we got married in August 1985. I am proud to say in my 35 years of marriage, I have not kissed, smooched, or had sex with anyone except my wife,” he asserted.

“All our offices”, he noted: “Have glass doors, so, people can see the inside during counseling. After pastoring 20 years in Accra, my Church Board, made up of noblemen and women, insisted that I get a security door since I don’t even counsel the opposite sex without my security, sitting inside by the door.”

Additionally, he said: “My wife also has my access codes to my phones, IPad and computers”.

With regard to money, Bishop Agyinasare popularly referred to as the Nation’s prophet and the pastor said he even pays taxes on gifts. “I paid taxes even on the gift of trips of sand”.

“I had always wanted to step off stage when I go on retirement to say, like the Prophet Samuel, the last judge of Israel”, said in 1 Sam. 12:3 and 4: ‘Here I am, witness against me before the Lord and before his anointed. Whose ox have I taken, or whose donkey have I taken, or whom have I cheated? whom have I oppressed, or from whose hand have I received any bribe with which to blind my eyes? I will restore it to you.’ ‘And they said, ‘You have not cheated us or oppressed us, nor have you taken anything from any man’s hand’”.

He said: “I also knew there would come a day when my financial integrity would be questioned and, so, I have never made my wife to count church offering before”.

“When we founded Perez Chapel in 1987 (then Word Miracle Church) in Tamale, I lived with my wife and some of my dependents in a house without electricity nor pipe-borne water for two years at the new Vittin Estates. My landlord was the father of the late Mr Angenu. We lived on my wife’s salary and gifts from loved ones. When we receive the tithes and offering as a church, they are counted by, at least, two people and recorded, then paid to the cashier and then it is lodged at the bank”, he narrated.

He continued: “We do not disburse from the collection point, what we use in a particular week is requested the previous Friday as an imprest. All other expenses are paid with a cheque with a principal signatory and, at least, one of the other three signatories on the account. For any expense, a voucher has to be raised, which must be approved. I can approve a payment and the accountant can stop it if he sees it does not meet accounting procedure. I accepted that checks and balances”.

Also, Bishop Agyinasare revealed that: “Every full-time pastor and full-time worker is on a salary”, and their Pay As You Earn (PAYE), Social Security and National Insurance Trust (SSNIT) and Provident Fund obligations are duly met.

“Most workers of government institutions and pastors of most established churches live in the government bungalow or the churches’ mission house. I live in my own house in Accra. I bought the land in 1992 from a high court judge (justice Mrs Selassie Williams) and when she asked for the name to use and I said Charles Agyinasare, she asked: ‘And what about your wife?’ So, it was bought in the name of Charles and Vivian Agyinasare. It took me two years to finish paying for the land”, he recounted.

Further, Bishop Agyinasare said: “When I started building, apart from the taxes the church office paid on my salary, every year, I computed and filed my personal taxes even to the trips of sand people gifted me.  We moved into our house in 1999 with only the outside plastered and the floors tiled and outside doors with only the master bedroom door fitted. It took us six years whilst living in the house to complete it”.

Apart from his financial transparency, Bishop Agyinasare also said he is very generous and philanthropic.

“The panacea for covetousness is giving, so, I have many people I personally pay school fees for every year from basic school to university.”

Narrating a recent incident to buttress that point, Bishop Agyinasare said: “Last week, 18 July 2020, a man asked me for help and when I did the MoMo. I transferred all the money in the account to him by accident and then I realised it. When we called MTN to block the money, they returned a call to us that the gentleman said: ‘The Bishop paid my children’s school fees; recently when I was going for surgery, the Bishop paid for it etc. If he has over-sent me money, I would transfer back that money to him’. And he did”.

“I have been privileged to sit on various boards etc. and in all the places, I used my sitting allowance to set up a scholarship fund for brilliant but needy students. Maybe when I am 60 years old and I sit on any Board, I would now ‘chop’ the sitting allowance”, he said.

Bishop Agyinasare said for Christians to strive to live above board, it is important they do not hide their faith from others.

“I recollect a story about a manager who got to his office one day asked his subordinates, ‘How many of you know that I’m a Christian?’ There was an embarrassing long silence then one person quipped, ‘Well, we didn’t know because your Christianity was real secret’”.

“It was quite obvious from the response that the manager’s subordinates knew well that their boss’s real character was a false definition of Christianity”, Bishop Agyinasare illustrated.

“By the grace of God, I have lived an open and transparent leadership style with my staff, including my associate pastors and children. There is, therefore, no hidden part of me that they do not know”.

“I have never done a deal with any staff member, so, I am not afraid when they leave me, there is nothing they would go and leak. It is said because the lion did not tell its story, the hunter came and told only how he killed the lion. I am not perfect but there are things I have been very particular about and one of them is my integrity”. 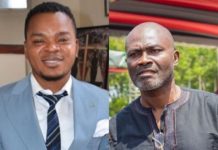