The life of a widow with four children, identified only as Angela, has totally turned around after receiving a hefty donation from Crime Check TV.

Angela, prior to the support, had been residing in an uncompleted building. Her plight came to light during a door to door donation campaign by newsmen.

Upon interrogation, she revealed she was the sole caretaker of her four children she bore with her deceased husband, making life a living hell for her.

With only GH¢100.00 capital, which is not enough to take care of her kids till the month ends, Angela and her children slept on an empty stomach almost every night.

However, after her story made its way to the news, an appeal for fund was championed by Crime Check TV to improve the plight of the needy widow, and funds kept trooping in from persons home and abroad.

Weeks after she was first met, Crime Check returned with an envelope full of money amounting to GH¢ 21,138.00 from 44 donors. She could not believe her eyes.

The expression on her face when she received the fund was that of joy and excitement till tears dropped from her eyes. 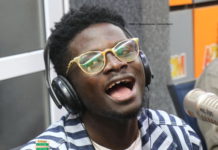 Video: I am looking for a 'special' girlfriend – Kuami Eugene