According to Solomon Nkansah, the beleaguered NPP member is suffering from “Multiple Personality Disorder” which makes her react violently at the least provocation.

Hajia Fati has incurred the wrath of media personnel after she attacked Adom FM newscaster, Charity Sekyiwaa Ahwenepa, at her party’s headquarters.

The NPP firebrand had stormed the party office ostensibly to stop suspended vice chair, Sammy Crabbe, from filing his nomination to contest the national chairmanship slot in the party’s upcoming congress.

The journalist, who was deployed to report on the happenings there, said Hajia Fati slapped her on the mouth when she attempted to take a picture of the scene being created by the woman.

When Madam Fati was quizzed about her conduct, she said she did not know the Adom FM reporter was a journalist because she looked like an “onion seller”.

He explained that the outspoken woman has,, over the years, gained notoriety for violence, adding that he is convinced she could be suffering from a psychological disorder.

“Hajia Fati needs serious psychological help because this is becoming too much. I don’t blame her because she is among violent people”, the NDC man said.

Solomon Nkansah also chided the NPP for taking too long to render an unqualified apology for Hajia Fati’s gaffe.

In a rebuttal, a communications team member of the NPP, David Prah said the party acted timely to ensure the situation does not escalate.

Going forward, he revealed, the leadership has resolved to punish any party member who assaults or infringes on the right of any media person.

“We have apologized unreservedly and we will not support Hajia Fati. Any party member who attacks any journalists will be punished”, he stated. 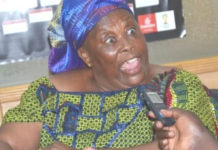