An 83-year-old Nigerian monarch is allegedly demanding a DNA test from one of his wives over alleged infidelity.

The report revealed that Olori Omoh, who relocated to the UK a few months ago alongside her co-wife Folashade, allegedly has a romantic affair with a married man in the country.

The illicit affair got to the man’s wife, who frowned over her husband’s relationship with the queen and sent a message to the monarch, and he’s now requesting a DNA test from his wife.

The blogger added that Olori Omoh assumed that Folashade snitched on her by telling the monarch, and she planned with her boyfriend to deport her to Nigeria.

THEY SENT MESSAGE TO THE KING ABOUT OMO WAYWARDNESS FOR UK AND NOW IKU BABA YEYE WANTS TO DO DNA FOR OMO KIDS NOW, THE THIRD QUEEN( IYA META) WHO WENT WITH OMO TO THE UK WAS DEPORTED BECAUSE ACCORDING TO QUEEN OMO NA IYA META GO DEY GIVE KING THE GIST SO OMO PLANNED WITH HER SAID BOYFRIEND AND THE THIRD OLORI WAS DEPORTED , OYO UNA SEE WETIN UNA KING USE PRICK CAUSE.

THAT ONE SEF DON LAND FOR OYO NOW BUT SHE DEY ON A LOW KEY AS SHE DIDNT WANT PEOPLE TO KNOW SHE IS BACK,Make una help us beg all these Shedi Bala Bala Queen ooo make them no use PUNA scatter throne ooo. I come in peace, full details later. 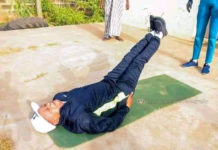 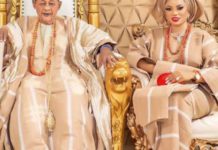