Veteran Actor, Henry Harding, popularly known as Papa Nii, in the showbiz circles, has urged young industry players to build other careers rather than taking acting as a full-time career.

According to him, a person’s sole reliance on acting alone cannot help him withstand the storms that may blow in bad times.

“You are plying a trade and even fortunately for us, most of us were not professional actors but had our own professions before acting such that when the need arises; the acting goes down or whatever, you shouldn’t be found wanting,” he said.

Papa Nii of ‘Taxi Driver’ fame said this in an interview on Accra-based Class FM, adding that people must prepare for their future while they are still relevant in the industry.

“In short, once you’re on heat, you need to prepare yourself and that is what I feel. Though I believe that the government should also invest into it, it has not been able to do so.

“The government stands to gain a lot if it would be as serious as it should be in that direction. Apart from that, whoever comes into the fray must also know what it entails,” he noted.

His advice comes on the back of many calls for help from veteran and ailing actors who in recent times have been reported to be languishing in pain and poverty.

Apart from ‘Taxi Driver’, Papa Nii was also famous for his use of jargons in several television productions and movies including Adults In Education, Dada Boat and Home Sweet Home among others. 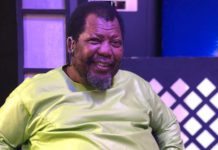