The National Youth Wing of the National Democratic Congress (NDC), led by George Opare Addo, has called on elders of the ruling New Patriotic Party (NPP) to advise Nana Boakye alias Nana B to refrain from using unsavoury words against the person of Mr John Dramani Mahama.

Former President John Dramani Mahama, a week ago, cautioned the EC against remaining adamant to calls on it to discontinue its decision to compile a new voters’ register.

Mr Mahama admonished the EC and its Chairperson, Jean Mensa, to be wary of its decision as it could plunge the country into electoral violence.

The former President, in the same communication, said the EC chair would be held responsible should the country be plunged into any such chaos.

But the National Youth Organizer of the NPP, commenting on the statements of the former president, described the words of Mr Mahama as irresponsible and reckless.

Those comments by Nana B, has angered the youth wing of the NDC who say they will have none of Mr Boakye’s attacks on the former president and has, therefore called on elders of the NPP to call him to order.

A press release by the party’s youth wing, signed by the National Youth Organiser, George Opare Addo, has warned the NPP against using insults and vitriolic attacks against the NDC as the same will be meted out to them.

And we serve notice that we can equally reply in same measure. If the NPP intends to make this elections about insults and vitriolic attacks, then we will meet them boot for boot, the statement read.

Read press release below in full: 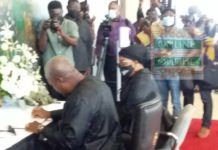