The four-year-old girl, who was defiled by a 16-year-old boy and her private part destroyed with a knife, has successfully undergone surgery.

Aside undergoing a successful surgery and currently responding to treatment, the girl, through the help of the Ghana Girls Guide Group, has been ‘adopted’ by one Daniel Asem based in the United States.

Mr Asem has already provided accommodation – fully furnished – for her and her father. This is aside the assurance given by Mr Asem that he will see her through school to the tertiary level.

A psychologist has also been assigned to the little girl to help her deal with the psychological trauma of her ordeal.

Justice has also been served as the 16-year-old boy has been sentenced to 18 years in imprisonment.

The help came thanks to the decision of Adom FM’s Dwaso Nsem team to take up the matter.

Another sorrowful story turned into a joyful one by the Adom FM Dwaso Nsem team, was the story of a lady, identified as Comfort, whose husband abandoned her and her three children after the husband impregnated her 13-year-old niece living with them at the time.

She said life became very difficult for her and her three children after being abandoned.

She recalled the moment she gave birth to her third child and had to be discharged from the hospital on the benevolence of a stranger.

With her also, the Adom FM Dwaso Nsem team took up her issue and requested for assistance from well-meaning Ghanaians.

Today, through the benevolence of Ghanaians, Comfort now owns her own tailoring shop and is able to feed herself and her three children.

She was full of smiles and seemed to have gained weight when she visited the studios of Adom FM on Monday. 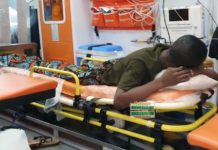