At least 26 market women in Bolgatanga in the Upper East region have been arrested by police for embarking on a demonstration.

The women were demonstrating against authorities for locking the Bolgatanga market as social distancing rules to curb the spread of coronavirus are implemented.

Joy News’ correspondent, Albert Sore, reported that the women have vowed not to relocate for fear of losing their customers.

But, he said, the Bolgatanga Municipal Assembly has put in place measures to accommodate the close to 1,000 market women to curb the spread of coronavirus.

Albert Sore said the police arrived at the scene and arrested the 26 women said to have led the protest.

“I spoke in our local dialect to calm the women down but they ignored me that is why my men arrested them,” he said.

Supt Anaba said the 26 women have been put before court to serve as a deterrent to others.

“Opinion leaders in the area have to beg for clemency but the law will deal with them,” he said. 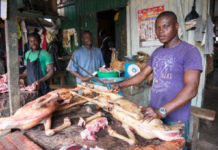 Butchers in Bolga on strike