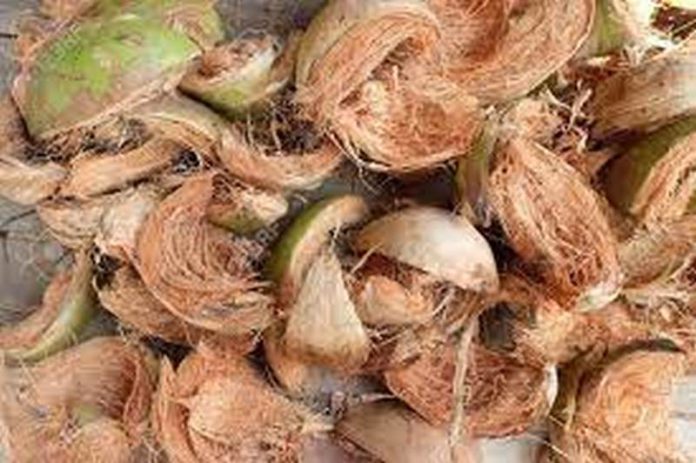 The Government of Ghana, through the One District One Factory (1D1F), has been urged to turn its attention to coconut husk as it can help reduce unemployment in the country.

An entrepreneur and managing director of Long T. Ventures, Emmanuel Tetteh Mensah, who made this appeal said as someone into the coconut husk business, it would be appropriate for the government to invest in it.

His appeal comes after several attempts to get his company under the government’s 1D1F initiative continue to be in vain.

Mr Mensah, speaking on Adom FM’s morning show Dwaso Nsem Friday, said the raw materials are available, hence will plead with the government to step in to help with the needed capital.

“If the government can get us investors both local and foreign to meet up with us, we would appreciate it a lot. We all need jobs and we have invested a lot into the project.

“People are expecting to see the project in the mainstream but without the government, it will not be possible which is why we are pleading with them to support us,” he said.

Speaking on the benefits of coconut husks, Mr Mensah said they are substitutes for wood and can offer employment as more youth struggle for jobs.

“This coconut husk we see being dumped around us can offer employment and I can assure you what it can do. We can use the husks to make tables and other wooden structures instead of wasting money to order wood products.

“A company that is focused is ready to help but it has become very difficult to get into the 1D1F. It’s going to offer indirect jobs and at the same time clear the environment of all the waste in the system,” he added.

He revealed they have acquired a 50-acre plot of land at Bawjiase but are unable to find investors and wonder how the 1D1F will grow with this attitude.

“Anytime an investor is brought to you, he rather tells us that they want an existing company and so how will the President’s vision be carried on?” he queried.

Meanwhile, the Public Relations Officer for the Ministry of Trade and Industry, Prince Boakye Boateng, on the same show said they have invested in a lot of projects under the scheme, adding companies who want to be on the scheme must come up with workable business plans.