Mr Brempong said the mafias who are within both the ruling New Patriotic Party (NPP) and the NDC use these hoodlums to cause confusion.

He made the comment when he appeared before the Emile Short Commission probing the by-election violence which took place at Ayawaso West Wuogon.

Armed masked men stormed the candidate’s house at Bawuleshie based on intelligence that there was a stockpile of arms there.

The move left at least 16 people injured in what has been widely condemned by the public.

Commenting on the issue, Mr Delila Brempong said Ghana was destined for doom if such groups are not disbanded.

“These groups are owned by mafias and kingpins within the parties and they use them to cause chaos,” he opined.

The NDC man feared if the police and military don’t up their games, these groups will take Ghana hostage.

“From the little, I saw in my house, if the police and the military have to sit up, we are all finished” Mr Brempong stated. 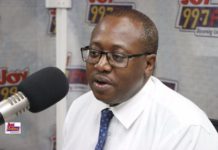 I was not offered police protection – Delali Brempong