I am not a fan of gun and I am don’t want to be in possession of it. I feel like having it means it speaks for you and you can easily use it when someone gets on your nerve, these were the words of singer Kuami Eugene WHEN Andy Dosty asked him if he’d buy a gun to protect himself.

Speaking on Daybreak Hitz on Hitz FM on Friday, the Lynx entertainer said the reason he failed to go out in the streets the first time he visited America was because of his fear of guns.

According to him, unlike Ghana where most people are used to the firing of warning shots, no one does such abroad.

When someone gets on your nerve you are tempted to use it. In America, I didn’t wanna go out at all. Gun is not like fighting a friend with fist where you go to the hospital later.

With a gun, If someone slacks, that is it; and it’s a no no for me. If you have it, I don’t wanna get close to you or be your friend. One day you will get angry and anything can happen. If you are my friend and you have a gun, tell me.

When he was queried on how he protects himself, the Rock Star said:

It’s not like I am fighting people so I have to protect myself. I don’t have to go fight. If you are not a security man and you have not been trained on how to hold a gun, you can’t tell me you know how to use it.

You have it because you know someone will get on your nerve. Its only a few people who have the heart to shoot even that they shoot in the air but one day it can change. If you are not a security person, having a gun is not safe, he said. 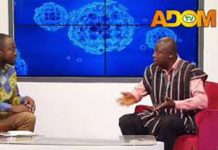