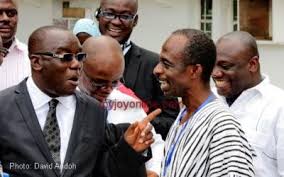 It’s trite knowledge that General Mosquito was a good friend of Sir John and as such, the NDC stalwart says he was yet to recover from the shock his death.

“I am still in a state of shock and doubt because though I heard of his sickness, I thought it was just stress since he had been busy lately,” he said.

Mr Nketia disclosed that his last conversation with Sir John was about two weeks ago.

“He called me to break the news of his sister and mother’s death which funerals were scheduled for July 9 but I was in Tamale by then so I assured him of my visit immediately I touch down in Accra,” he recounted.

According to General Mosquito, he received a call two days ago that the funeral had been rescheduled for August 31 because Sir John was not feeling well.

“I thought it was the stress from the funeral preparations only for my wife to tell me about the death yesterday and when I switched on my TV, the news was all over,” he added.

Listen to Mr Asiedu Nketia in the audio below: