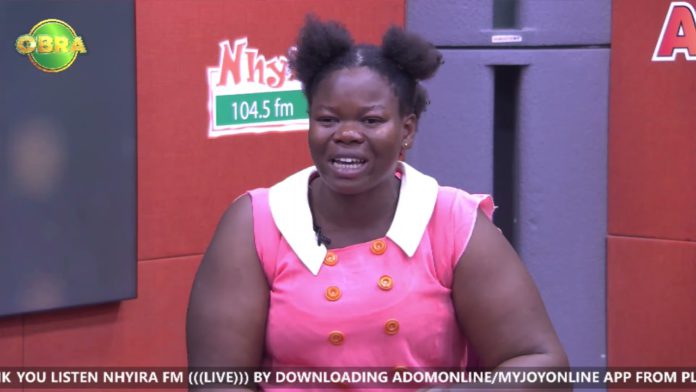 Ruth Azong is a 24-year-old visually-impaired lady with a month’s old baby.

She appeared on Nhyira FM’s Obra Show to plead with host Mama Effe to help put her baby into the children’s home.

Her reason for making such a move later proved to be untrue, especially her claim that she could not locate the father of the child.

Ruth informed Mama Effe that her child’s father, known only as Kwame, fled immediately she informed him about her pregnancy.

She also claimed the man has never supported her in any way till she delivered.

She sought help from Mama Effe to access support from the social welfare department.

Her plea was almost taken in by Mama Effe until a listener phoned to provide the contact of Kwame.

Kwame told a story that was the exact opposite of what Rita had said on the Show.

According to Kwame, he has been providing for the upkeep of his baby, but revealed the child needs help for a medical treatment.

Ruth Azong later admitted she lied. She cried passionately and begged for forgiveness after the show.

According to her, she lied in desperation to hand over the baby to the social welfare in order to continue her education.