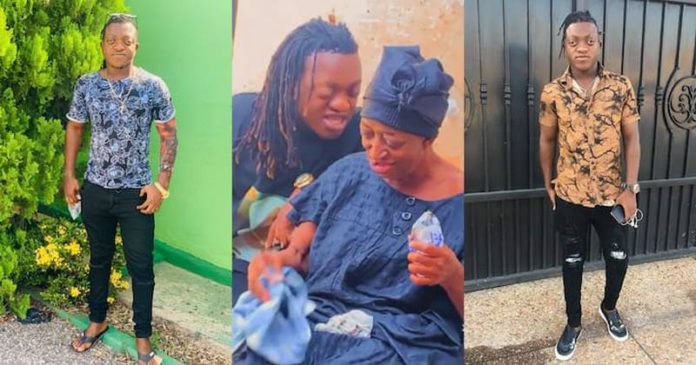 Popular Kumawood actor, Yaw Adu, known by many as Sumsum Ahuofedua, has warmed hearts online after he posted a video of himself and his grandmother online.

In a video on the Instagram page of the diminutive actor, Sumsum Ahuofedua was seen seated in front of a room with his granny.

The duo was having a hearty conversation when they were filmed by someone who also appeared to be struck by the chemistry between grandmother and grandson.

Sumsum Ahuofedua is seen seated on the right side of his grandmother as he leaned in to speak into the ears of his granny who was grinning from ear to ear.

The aged lady was also seen leaning back to speak some words to her grandson who returned the smiles as he ‘vibed’ with her.

What caught the eyes of many and added a huge truckload of cuteness to the video was the striking resemblance between the two.

Sumsum Ahuofedua and his grandmother looked so much alike that it was hard to tell the difference between them, save their gender.

The actor captioned the video: “@sumsum_ahoufedua visit his grandmother”