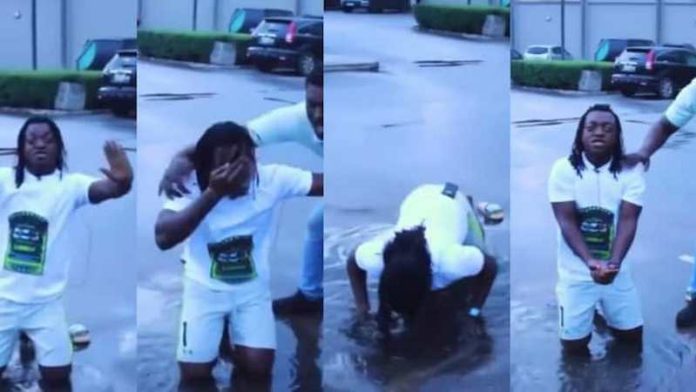 The diminutive actor, in a new video on Instagram, was seen granting an interview at the car park of a shopping mall.

He was speaking to the issue of Shatta Wale and Medikal’s arrest and his opinion on why they had to be released.

All of a sudden, the popular Kumawood actor took off his sandals and went on his knees to beg for the two musicians.

Sumsum Ahuofedua knelt in a puddle of water in front of the mall and beseeched the Inspector-General of Police (IGP) to release them.

According to him, Shatta Wale and Medikal are his close friends and that he was unhappy to see them languishing in remand.

Sumsum said Shatta Wale and Medikal had contributed massively to the growth of the entertainment space, therefore, they needed to be freed.

He admitted that the two musicians had faltered but caging them was not the way to go since they had families and huge fanbases who were concerned about their welfare.

At a point, Sumsum was seen ‘bathing’ in the muddy water to show the IGP that he was indeed sorry for the conduct of the two musicians.

Shatta Wale has been placed in prison custody pending a court hearing after he was involved in a shooting stunt.